Say 'poker' and most people think of no-limit Texas Hold'em. It’s exciting, dramatic and with a format that’s perfect for TV it’s become the format of choice when it’s time to shuffle up and deal.

But it’s not the only version of poker out there. Here’s our handy guide for when you want try something new at partypoker.

Limit Hold’em plays exactly like No Limit Hold’em except the amount you can bet is limited to predefined bets.

This is the old school game of choice for poker players. It plays out the same as Texas Hold’em, with two hole cards, a flop, a turn and a river – the only difference is the way you bet.

Limit poker is mainly played on cash games and you’ll normally find the specific betting limits in the table name. A $2/4 table will have betting increments of $2 and $4. The first figure is used for the first two betting rounds and the second amount is used for the final two rounds.

Blinds for this table would be $1 and $2 as the big blind on a limit table is always the same size of the small bet.

On a $2/4 table, if you were the first to bet, you can only bet $2. The next person to act can fold, call or raise to a total of $4. If a third player wanted to re-raise their total bet would be $6. This $2 limit applies to pre-flop and post-flop betting.

On the turn and river the bet limit moves up to the higher bet limit, which would be $4 on this table.

In limit, the number of raises per round is limited as well, usually at four but you need to make sure you find out what the limit is on your table when you sit down. With its two specified betting limits, this is a very subtle version of poker. You won’t find any maverick bets of ‘all in’ here, that’s for sure.

Like limit, your betting is curbed. But here, your maximum bet is capped to however much is in the pot at the time of making your bet.

In between no-limit and limit is where you'll find pot limit. Like limit, your betting is curbed but on these tables, rather than fixed, pre-specified limits, your maximum bet is capped to whatever is in the pot at the time of making your bet (this includes all the money in the pot and all the bets on the table, including any call you need to make before raising).

You receive hole cards just as in Hold’em, but this time you get 4. Five community cards are also dealt face up for everyone. The important thing to remember is that you must use any 2 of your 4 hole cards to make a hand!

Omaha is another much-loved variation of poker. Players receive four hole cards that only they can see and five community cards that are dealt face up for everyone.

Each player must use two of their hole cards, plus three of the community cards, to make a hand. There are four rounds of betting, which play out in the same way as Texas Hold’em. If you need a little reminder then you can refresh your memory here.

Just like pot-limit Hold'em your betting is curbed in pot-limit Omaha. Your maximum bet is capped to whatever is in the pot at the time of making your bet (this includes all the money in the pot and all the bets on the table, including any call you need to make before raising).

Almost the same as Omaha except the pot is split between the high and the low hands and the end of the game. A low hand must contain five different cards that are equal or inferior to 8. For example, A-2-4-7-8.

Just like regular Omaha, each player must use two of their hole cards, plus three of the community cards, to make a hand. And there are still four rounds of betting that play out in the same way as Texas Hold’em.

Your betting is also curbed in Pot-Limit Omaha Hi/Lo. The maximum you can bet is capped to whatever is in the pot at the time of making your bet (this includes all the money in the pot and all the bets on the table, including any call you need to make before raising).

7 Card Stud offers a drastic change of pace and format from both Texas Hold'em and Omaha and requires a certain amount of patience. However, it's an exciting game that can be very rewarding!

Before a game starts, each player must post an 'ante', a mandatory amount that ensures there is some money in the pot. In stud poker games, there are no community cards. Instead, the dealer begins by dealing clockwise until each player has three cards. The first two cards are dealt face down ('hole' cards), the third face up (the 'door' card).

7 Card Stud is divided into five rounds of betting, and the betting moves clockwise around the table.

If two or more players tie by holding equally-strong winning five-card hands, the pot will be split between the tying players. If there is an odd chip, it will be given to the player whose hand has the higher suit.

The player with the lowest-ranking up card starts the game with a token bet called the 'bring-in'. If two or more players have the same lowest card, the bring-in is determined by suit in alphabetical order: clubs, diamonds, hearts, and spades.

Once the bring-in bet has been made, each player (starting with the player to the left of the bring-in) can fold, call, or raise to the betting limit.

Everyone is dealt another up card. At this point, the player with the highest two up cards starts the betting. On this round of betting only, if a player gets an open pair, he or she can make a double bet.

Everyone is dealt another up card. The player with the highest combination of up cards starts the betting.

Everyone is dealt another up card. Again, the player with the highest combination of up cards starts the betting.

Seventh Street or The River

Everyone is dealt their final down card. The same player who started the last round starts the betting.

The player with the best hand wins.

7 Card Stud Hi/Lo is the same as 7 Card Stud, except the pot is split between a high hand (the same as in 7 Card Stud) and a low hand (which is based on five cards that start at eight or below).

As in 7 Card Stud you get seven cards with which to make the best five card poker hand you can using the standard hand rankings.

When a hand goes to showdown it is split 50/50 between the best high hand and the best low hand. If no players have a low hand then the whole pot goes to the player with the highest hand. 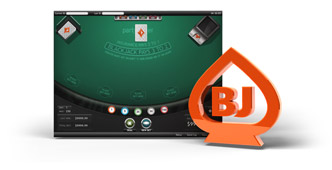 Blackjack is a casino classic that you can enjoy right here at partypoker.

Are you a new player?